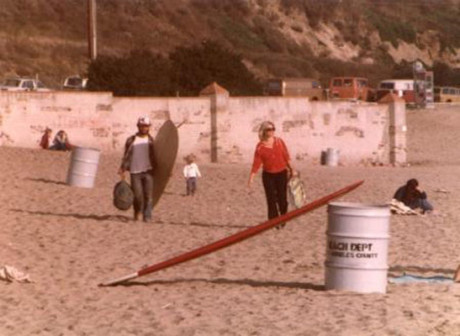 It’s Not Just Another Brick in the Wall – Pt. 3 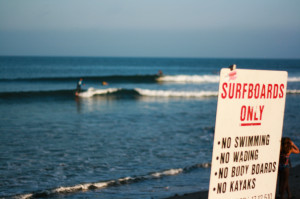 My earliest memories of the wall at Malibu go as far back to when I was still in diapers. Later, as a teenager, I become enthralled with surfing and began hanging at the infamous concrete barrier that was once meant to keep average-day citizens like myself off the formerly isolated, private beach. My dad was the first to educate me on the importance on how to earn my ‘rights’ out in the water. As my surfing skills began progressing, I remember him telling me things like, “Make sure you keep your hands down. You don’t want to be flailing them all around.” Or when I asked his advice on how to “hang five” he told me, “Well, whatever you do, don’t shuffle your feet up there, only kooks do that.” Early on I knew there was a specific code to follow that would ensure my acceptance; anyone that maintained face in the First Point lineup understood and accepted this code. I adhered to these guidelines and gradually earned local status, a privilege that grows grander the higher up the hierarchy you manage to climb. Swells of exceptional surf always brought on the most intense and aggressive sessions where locals found it necessary to be the sole participant on any given wave. If, and when, another rider failed to adhere to the existing protocol, locals saw it fit to rant and yell with possessive claims, “Hey, comin’ down. My wave!” Or there were times where locals banned together to seek retaliation or protection from non-locals giving trouble out in the lineup. It seems there was (and still is) a system where Mary Parker Follett’s theory of “power-over versus power-with” worked side by side.[1] The ‘privileged’ surfers enforced the systems of power through the ‘snaking’ of waves and use of intimidating language (power-over), as well as shared and encouraged the power amongst each other (power-with). This hegemony worked because this structure had been established and accepted by the original frequenters of the Malibu wall. 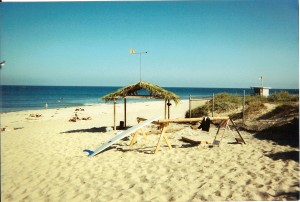 As I scaled the hierarchical ladder, I was faced with discrimination, which made me feel like I needed to defend my position among the privileged. Within the subculture of surfers at Malibu, were other smaller cliques, one of which consisted of all the younger, ‘hot-dogger’ surfers, mainly pre- and post- pubescent men, who all hung out under a man-made palapa, a Mexican-style hut with a palm frond-thatched roof. For decades, there were selected places on the sand that designated one’s status and ‘coolness’ within this society. The stigma of cool that was once obtained by hanging at the wall all but disappeared in the 1990’s, right around the time of my induction, and soon hanging out at the palapa became synonymous with being popular, accepted, and a skilled surfer. I was the first girl to be accepted into this elite circle and one of the few to maintain a foothold within it. The first year or so was a typical newlywed period; however as time went on, I found that I was beginning to be treated as a second-class citizen and discovered I was under regular scrutiny by the powers-that-be. The mischief that had been inducted into the First Point culture at the wall earlier before had now perpetuated hi-jinx under the palapa. There were rock wars, wrestling matches, I was “pantsed” in front of crowds, called names, lied about, snaked on waves – for a few years I felt like the palapa was nothing but the ‘devil’s den’ and when it got torn down, I secretly rejoiced. It became clear to me: the reality of the game I had to play in the lineup and under the palapa was far more involved than just defending myself on the sand and jockeying for waves in the water. As a woman, I was also faced with all the other ‘non-locals’ and tourists who were unaware or still carried the notion that girls were not serious surfers, but just trying to get a tan.

The reality I had constructed for myself instilled a sense of territoriality and righteous indignation within me. Like my cohorts of yesteryear, Miki Dora and May Rindge, I felt I had the right to preserve the society that I knew and loved. This need for retaliation transferred into my communication skills with people in the water. At all times I had my guard up and was ready to impose the rules that I was forced to adhere to, yet because of the varying ghost voices[2] from the past – I automatically used aggression, as opposed to proper assertiveness, when I had confrontations while surfing. I was no stranger to the use of foul language and phrases; I would paddle right up and into the faces of people, I would badger and make sarcastic comments from behind when they snaked me, and I even would grab and/or push to get someone out of my way on a wave. A feeling of entitlement to behave in such manner consumed me because I had endured more than the average up-and-comer at First Point. I did not know it at the time, but I was experiencing internalized oppression [3], where I began to believe this oppressive behavior was justified and deserved and, in turn, partook in its perpetuation. In a sense, I had become a modern-day May K. Rindge, desperately trying in vain to keep the beloved Malibu a pristine a sacred place, but my, like Mrs. Rindge’s, efforts were thwarted by an environment that I was not in control of. 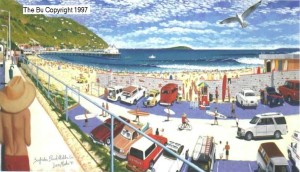 The transgenerational phenomenon that was established many years ago and eventually engrained into me by my father and peers, as well as the lack of awareness from the constant exchange of unfamiliar and inexperienced newcomers, caused me to feel the need to aggressively defend my home and my status within it. It was as if “Rindge’s Revenge” had taken shape for me as the ghost of May Rindge herself! The hardheaded woman had joined me in my cause. My perception reasoned that I had worked so hard – I had followed all the rules and took the brunt of the many cruelties from the sexually confused and frustrated palapa – and I was still there and I was still progressing, and no one was going to influence any change in that. I have never got into an actual fistfight. I have been threatened, been told nasty things, and heard language no lady should be subjected to. Yet for whatever reason, Malibu has always had a special place in my heart – a love/hate relationship, you could say, and I have put up with the drama because I wanted to be accepted. Daily I experienced a feeling in the pit of my stomach as I would descend PCH and get the first glimpse of the surf break before actually arriving there. The emotion was both elating and debilitating because as much as I loved being on the sand and in the water, I was just as uneasy about the mischief the day possibly had in store. As the years progressed, the palapa was eventually torn down, and as people matured and spent less time at First Point, the cliques changed and the social dynamics of the beach began transferring to the next generation.

The conclusion… The Wall – Part Four