The Wall – Part One

It’s Not Just Another Brick in the Wall – Pt. 1

Preceding the arrival of the Spanish explorer, Juan Cabrillo, who set sail from Navidad, Mexico in June 1542, the coastal regions of California from San Luis Obispo to Malibu belonged to the Chumash, a Native American tribe who tended to build villages in favorable locations, one of which was known as, “Humaliwo,” a village in close proximity to the lagoon at the mouth of what is now called Malibu Creek. The word, “Humaliwo,” was recorded with the connotation of “where the surf sounds loudly.”[1] The city of Malibu now rests on acres upon acres of land originally awarded to early California settlers through Spanish land grants.  The most notable of these settlers was May K. Rindge, the fourth and final owner of the sacred Malibu Rancho, who fought a long, tough battle in attempts to keep the railroad, and later, the highway, off of her isolated land. Despite her efforts, the Roosevelt Highway was opened to the public in June of 1929,[2] marking the beginning of the end for an era of cattle ranchers and secluded country living. In response to the construction of the infamous highway, now known as the Pacific Coast Highway, Mrs. Rindge constructed numerous fences and boundaries in hopeless efforts to reclaim her domain and privacy.  One of these barriers was built on the site of the Rindge family’s beach home, called “Vaquero Hill,” located at the Malibu Lagoon, adjacent to a beach that has since obtained popularity through the surfing culture: Malibu Surfrider Beach. What May Rindge created was a brick wall that separated the public highway and, the then private, Malibu Beach.  The wall was designed with the Spanish influence that was popular at the time- constructed from concrete brick and accented with terra cotta and colored tiles that were manufactured at the family’s tile and pottery factory located at the south end of their private beach. Although the wall signified the Rindge family’s claim to territory that was rightfully theirs, the wall also later became a symbol of privilege and territoriality for a long line of surfers who called the beach and surf break “home.” Malibu has long been associated with glamour and affluence: “first, the aristocratic Rindge family and their battle to keep the vast estate exclusively theirs, then the influx of Hollywood royalty, and later the sun gods and goddesses of the American post-War youth culture that came to be epitomized by the Malibu surfing and beach scene.”[3] This high level of visibility that Malibu began with, carried on into later generations, most significantly with the development of the surfing craze of the 1950s and ’60s, especially at Surfrider Beach, coined to suffers as – First Point – the wall that May Rindge vainly constructed years prior, became a central focal point for not just frequenters of First Point, but for an entire conglomerate of inspired surfing enthusiasts all around the world. This phenomenological occurrence exemplified the affects of social and behavioral geography, as well as the language and meaning created from the wall’s existence as pertaining to the theory of social construction of reality. Through this wall, a unique society was born, derived from one family’s rightful territoriality; a proud society that created its own rules, regulations, language, and overall identity that eventually became the epitome of the surf lifestyle. The wall acted as a doorway for all who wanted to find acceptance and acknowledgement, almost like a filter for eliminating the undesirables and only those who could maintain composure amidst the chaos would be given the keys, a privilege only the most elite obtained.

The term phenomenology is not a commonly used or comprehended word, as many have a hard time just pronouncing it; however, that does not take away the significance of its meaning. The Stanford Encyclopedia of Philosophy writes, “Phenomenology is the study of structures of consciousness as experienced from the first-person point of view. The central structure of an experience is its intentionality, its being directed toward something, as it is an experience of or about some object. An experience is directed toward an object by virtue of its content or meaning (which represents the object) together with appropriate enabling conditions.”[4] As Professor Tracylee Clarke, assistant professor of Communications at CSUCI, so poignantly clarifies, “phenomenology is the study of consciousness (learning) as experienced from an individual’s perspective with an object (the environment) or meaning (what the object represents). The object becomes a powerful symbol that is realized through experience. There has to be the object [environment) and the virtue (meaning) and the right conditions for the consciousness learning to come about.”[5] The overall phenomenological theme of what the wall manifested can be explained through the Encyclopedia of Phenomenology, a comprehensive reference tool that looks into phenomenological reason, as well as its movement within philosophy and within many other disciplines, in this case- geography.  Subcategories of this field that pertain to the event at the wall and can be found in the Encyclopedia of Phenomenology were behavioral and social geography, the study of how human beings organize their existence in space, their sense of place, and how it varies among geographical locations.[6]

Another important theme surrounding the phenomenon at the wall at First Point in Malibu was the socially constructed reality the wall’s inhabitants created that incorporated a language that was both empowering and limiting. The social construction of reality states that realities are constructed through experience and language. Additionally, Descartes’ theorized that language is a pre-condition for thought and that social processes sustain knowledge.[7] Furthermore, the passing down of traditions over many generations exemplified the affect transgenerational phenomena have on the ecological identities that a given group of people constructs for themselves. Ms. Clarke defines ecological identity as, “how we see ourselves in relationship to/with the environment, which shapes and is shaped by our language and experience with nature.”[8] The territoriality and elitist attitudes assumed by generations of wall residents was inherited first, from the obstinate Mrs. Rindge, and then passed along over the years by the various high profile personalities that controlled the once private beach. As described by British psychoanalyst, Jamie Delgadillo Miranda, “transgenerational phenomena concern the transmission and exchange of cultural affaires, wherein the individual psychological experience is intimately related to and influenced by the complex web of relationships within the family/social structure.  This cultural inheritance, which comprises the mobility of values, ideals, interdictions, mandates, and such aspects from previous generations to the latter, immerses the human – biological – subject within an orderly dimension of exchanges and relations.”[9] 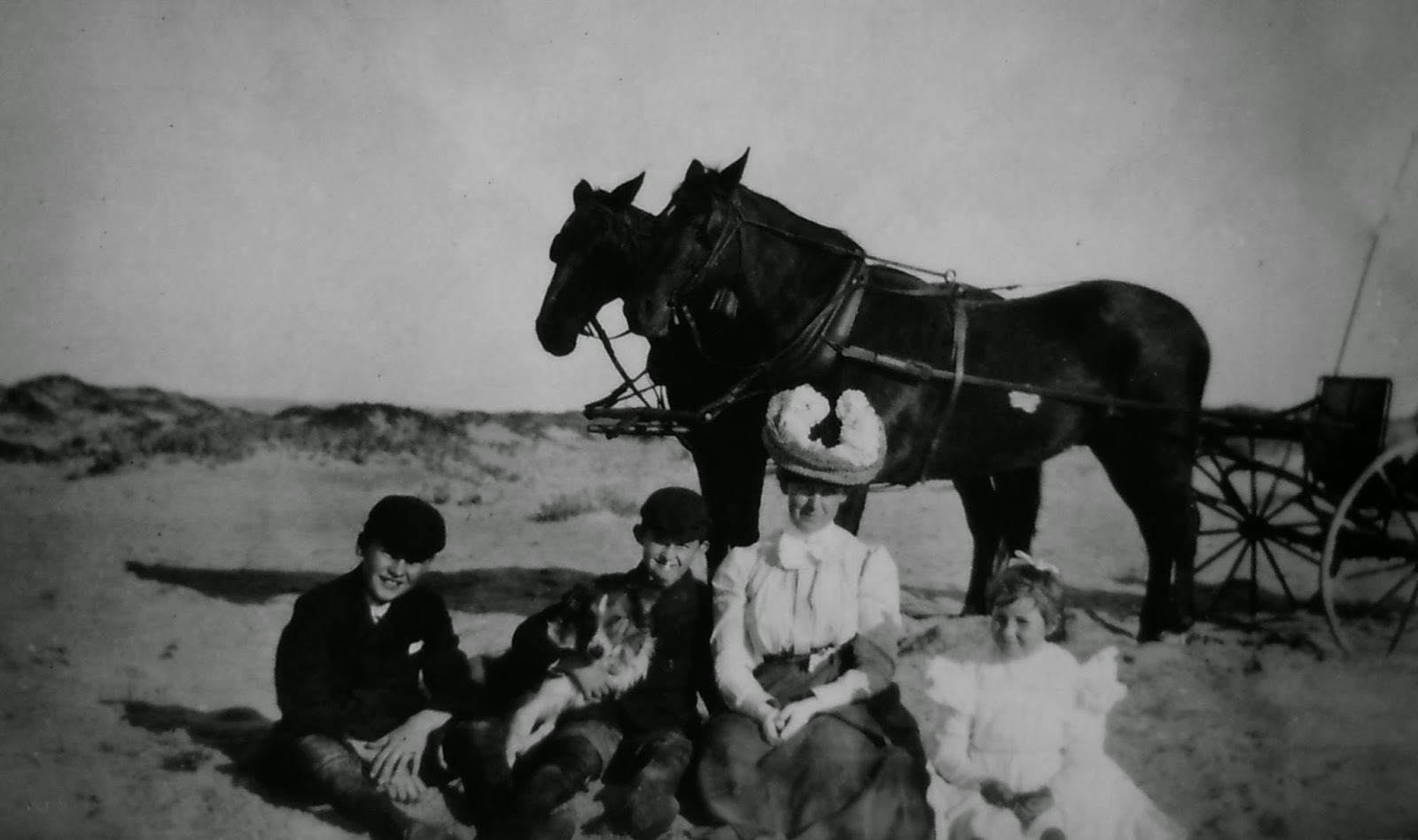 May K. Rindge and her children.

Erected around the time of the Great Depression of 1929, the Spanish-themed, concrete-constructed wall’s original intention was to ensure privacy and prevent access to the beloved beach owned by May K, Rindge and her family. The Rindge’s were early-day environmentalists, possibly even deep ecologists, who were overcome by the advancement of a dominant worldview that was not concerned with treading lightly on the earth.  Fredrick Hastings Rindge, husband of May, was quoted in 1898, “Oh, the happy vaquero! Who would be a banker when he could ride the smiling hills and hide himself and horse in the tall mustard! Who would be a slave to desk and electric light darkness in a back room, when sunshine is free to all? Aye, a liberal competence is splendid, but slavery is often its price. But then we cannot all be vaqueros.” Mr. Hastings died in 1905, which left his wife the duty of protecting their tranquil homestead by the sea. Although May Rindge fought off the big Southern Pacific Railroad, she was not able to thwart the construction of the Roosevelt Highway- (the thoroughfare from Santa Monica to Oxnard along the Pacific Ocean. The main goal of the Rindge family was to hold on to the natural splendor they had known for so long, but when they were defeated by the encroachment of modern technology, their strategy focused more on defensive measures, as with the fortification of what remaining territory they could call their own. With this came the wall’s creation and the conception of a new society who will eventually bear the same characteristics of privilege and righteous indignation, but also haw a true love and passion for the environment around them. Eventually, much to her dismay, Mrs. Rindge had to give up the majority of her pristine Malibu Rancho, “And so it happened, in the irony of history, that the woman who wished to lead a very private life, away from publicity on her isolated ranch by the sea, ended up selling her land to the very people whose presence and lifestyles were to make Malibu famous throughout the world.”[10]

[3] See “Development and Diversification.” Malibu Complete, History of Malibu. 14 May 2008,12 May 2008 <http://www.malibucomplete.com/mc.history.development.php>.